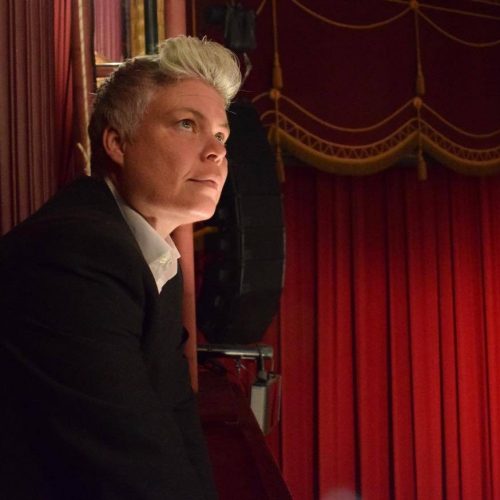 A renowned and award-winning poet, playwright and performer from Manchester, Louise Wallwein has made a name for herself as an explosive artist that detonates her audiences’ imaginations.

Her plays have been broadcast by the BBC Radio Drama North, produced by theatre and production companies Red Ladder, National Theatre Wales, Z-Arts, Contact, Arena Theatre Melbourne HOME Push Festival, Domestic II Royal Exchange, Greenwich and Docklands Festival/ GET North 18/BBC One. Walk The Plank, Take Back Theatre, Manchester Camerata, Absolutely Cultured, Battersea Arts Centre Louise has appeared as a guest contributor on programmes such as Front Row, The Verb R3 R4 and Reform Radio. GLUE, her acclaimed, theatre demolishing one-woman show will have a revival performance at the Off The Shelf Festival in 2019. Glue The Extended Remix is published by SmithDoorstop.

Louise was appointed as an MBE in the Queens Birthday Honours 2018 for services to Spoken Word Music and outstanding achievement in the Community. The Island, the Sea, The Volunteer and The Refugee a radio ballad directed by Susan Roberts was a BBC Pick of the Year 2016. Fall a film made with young artists from HOME won Best Film at the BFI Awards 2015 Winner Best Performance Manchester Culture Award 2019 for Hidden Manchester Camerata Dementia Voices.