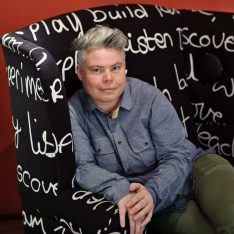 Writer, Louise Wallwein is an award winning Poet/Playwright/Film maker from Manchester UK. She is very proud to return to Manchester following her residency at the Centre for Creative Writing and Oral Culture in the coldest winter since records began in 2014.

Her career took off in 1998 when she performed an award winning one-woman show on the wing of a world war 2 Shackleton reconnaissance aircraft in the Air and Space gallery in Manchester Museum of Science and Industry.

Her plays have been broadcast by the BBC, graced the stage of Sydney Opera House, Royal Exchange and Contact Manchester. Louise has a history of working with Indian stories, having written The Magic of Sanjeevni.